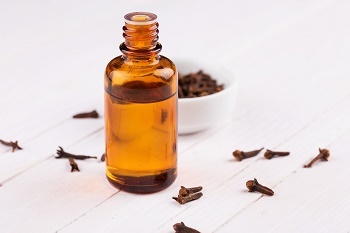 A potent natural remedy near and dear to my heart lately is clove essential oil.

Remedies: oil of cloves-spice of dignity.
Humans have been using cloves for thousands of years. Archeologists have found cloves in ceramic vessels in Syria dating somewhere around 1700 BCE, a Chinese leader in the Han Dynasty required those who addressed him to chew cloves to freshen their breath in the third century BCE, and in the 15th century AD, cloves were the main ingredient in a compound vinegar used by thieves to keep them from contracting the Black Plague while robbing the dead.

A profitable part of the Historic Indian Ocean Trade, clove is a popular aromatic spice in Asian, African, Indian, and Middle Eastern cuisines. Clove is rich in minerals such as calcium, iron, phosphorus, sodium, potassium, as well as vitamin A and vitamin C. Considered a carminative, which “warms’ the digestion, clove increases hydrochloric acid in the stomach and stimulates the peristaltic movement of the entire digestive system.

A common remedy in Ayurvedic, Traditional Chinese, and Herbal medicine practices – clove has powerful analgesic (pain-killing) and antiseptic/antibacterial properties. Clove is one of nature’s magical substances that kills or repels virtually all “pests” known to man. Bacteria, parasites, fungus, germs, die in its presence, even mosquitoes flee from it. It’s also a powerful anti-inflammatory, increases circulation and stimulates the immune system.

Most often recommended as a home remedy for toothaches, clove oil disinfects as it quickly numbs the pain-it’s even used in modern dentistry to treat the pain of a dry socket prepping root canals and as part of some temporary restoration materials. It can also be used for headaches, nausea, indigestion, bronchitis and asthma.

The main compound, eugenol, is behind the powerful aroma, that according to Aromatherapists, strengthens the mind and body, relieves headache, increases focus, stimulates memory, dispels anger and depression, and incites happiness and contentment! (Worwood 1996)

But clove oil should be used with care, it can irritate the skin when applied neat (undiluted) and should not be used on small children.

Having said that, here are some ways you can use clove oil at home:

This website uses cookies to improve your experience while you navigate through the website. Out of these cookies, the cookies that are categorized as necessary are stored on your browser as they are essential for the working of basic functionalities of the website. We also use third-party cookies that help us analyze and understand how you use this website. These cookies will be stored in your browser only with your consent. You also have the option to opt-out of these cookies. But opting out of some of these cookies may have an effect on your browsing experience.
Necessary Always Enabled
Necessary cookies are absolutely essential for the website to function properly. This category only includes cookies that ensures basic functionalities and security features of the website. These cookies do not store any personal information.
Non-necessary
Any cookies that may not be particularly necessary for the website to function and is used specifically to collect user personal data via analytics, ads, other embedded contents are termed as non-necessary cookies. It is mandatory to procure user consent prior to running these cookies on your website.
SAVE & ACCEPT
Font Resize
Accessibility by WAH